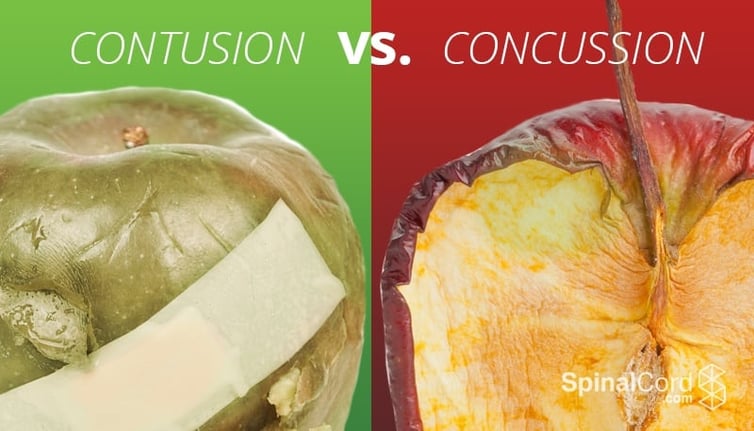 Newly-initiated spinal cord injury survivors are hit with a dizzying array of terms to remember—and doctors aren't always the best at simplifying what their endless list of jargon actually means to patients. For example, two terms that are closely associated with head/brain injuries are contusion and concussion. These terms are often used semi-interchangeably by non-experts, but doctors often have a set definition in mind when they use either term.

“What is a contusion? What is a concussion? How do the two terms differ from one another? What treatments are available for each? How can I tell if I have a contusion or a concussion?” People who have experienced any kind of severe head injury often have questions like these. Here is some information to help you answer these questions:

What is a Contusion?

What is another name for contusion? The word “contusion” is basically another word for a bruise—a collection of blood not in a blood vessel. Contusions can also be referred to as hematomas (based on the Greek words for “blood” and “mass”).

What is a Concussion?

The term “concussion” generally refers to widespread brain trauma due to a blow to the head, shaking, or a similar injury. While contusions can happen anywhere on the body, concussions are specific to injuries that affect the brain—and may not involve visible bruises.

The effects of a concussion are varied, and may change in severity depending on the location of the injury, the severity of the force applied to the brain, and the quality of care following the injury.

One might assume a concussion is just a more serious contusion. The reality is that the two injuries are fundamentally different. While they are related, and one can cause the other, understanding the difference between a concussion vs contusion can help you get a better idea of what to expect from your recovery journey.

Because both contusions and concussions are a type of traumatic brain injury (TBI), and because both are often the result of a fall or blow to the head, it's easy to confuse the two. Even more confusing is the fact that you can have both at the same time.

A contusion does not mean you have a concussion, but some contusions are caused by head trauma so severe that the damage affects a larger portion of your brain. Likewise, a concussion does not necessarily indicate a contusion, since shaking and other brain injuries can produce brain damage without visible bruising.

The difference between the two ultimately comes down to a simple distinction:

Download our Simplified Guide to Understanding a Brain Injury
for more details on the anatomy of injuries to the brain.

For the purposes of this article, we will focus on the effects of head contusions. Depending on the severity of a contusion, it's possible to experience no symptoms at all, aside from some minor pain or swelling on the area where you hit your head. When symptoms are present, they range from minor to life-threatening, and can include:

A contusion often occurs after a fall or a blow to the head with a hard object.

Contusions in the head can vary in severity depending on their location and the amount of internal bleeding that occurs.

Common head injuries resulting from blows to the head (such as from walking into an object headfirst, being struck with a baseball, or similar events) can result in a mild contusion. Mild head contusions often only have surface bruising at the site of the impact, and may be associated with some pain at the injury site, but with no noticeable long-term effects.

Moderate contusions may cause internal bleeding near or around the brain, and are often caused by more severe head traumas. These contusions may be accompanied by concussions, and can cause more severe symptoms, such as short-term memory loss, difficulty focusing, and loss of consciousness.

Some moderate contusion symptoms may persist, even after treatment/recovery.

Severe contusions can be life-threatening conditions that require immediate medical attention. When these contusions occur in the brain, they can result in concussion-like symptoms (and are extremely frequently paired with concussions). Severe contusions should always be treated as soon as possible to prevent or limit permanent harm.

Even with treatment, there may be permanent damage—although prompt care can limit the severity of these effects.

Contusion treatment options will vary depending on the severity of the contusion and its location in the head. Mild contusions may go away with the simple passage of time. Meanwhile, moderate and severe contusions may require invasive surgery and/or the use of prescription medication.

Contusion treatment regimens should be prescribed by an expert physician after undergoing a thorough examination. During the examination, doctors may:

How Long Does It Take a Contusion to Heal?

The recovery time for a contusion varies based on the severity of the injury and the treatment regimen. Some minor contusions can clear up in a few days with nothing more than simple bed rest and mild medication. Other contusions can takes weeks or even months to heal—especially if invasive surgery was required to alleviate pressure on the brain.

For especially severe contusions, post-op recovery can be a long process as patients rebuild their physical stamina and ability to coordinate. 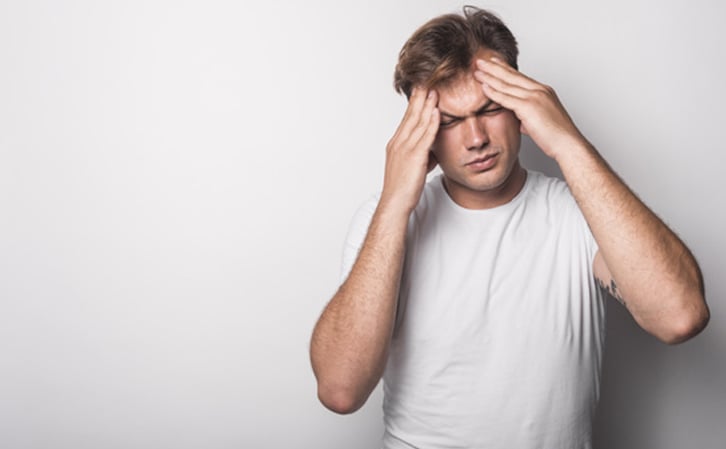 There are different types of concussions that vary in severity depending on the location of the injury, the amount of force involved, and whether any hematomas (i.e. contusions) are present after the injury.

Mild concussions can occur as the result of a hard blow to the head or severe shaking—such as from being hit in the head with a hard object or suffering mild whiplash during a hard stop in a car. Mild concussions can cause some temporary dizziness and/or disorientation, but don’t usually have lasting effects.

The symptoms of a Grade 2 concussion may last for longer than a Grade 1 concussion.

A concussion may be considered severe (or a Grade 3 concussion) if it results in a temporary loss of consciousness. These concussions always warrant immediate medical attention from a trained professional, and may have permanent effects on coordination, speech, and cognition.

If you suspect that you or a loved one has suffered a concussion, it’s important to seek medical treatment as soon as possible. In most cases, the diagnosis and treatment of a concussion is similar to that of a head contusion—the doctor will make a thorough inspection of the injury, and may prescribe bed rest, medication, or surgery as needed based on their observations.

One general concussion protocol to remember when it comes to treatment is this: The sooner you can seek treatment for a concussion, the better. Leaving a head injury undiagnosed and untreated for too long can result in severe, long-lasting effects.

How Long Does It Take a Concussion to Heal?

Concussion recovery times can vary greatly from one case to the next based on a variety of factors. For example, a mild concussion with no epidural or subdural hematomas (blood clots) in the brain can take mere days to fully recover from, if any symptoms are noticeable in the first place.

How to Test for a Concussion

Wondering how you can test for a concussion or contusion? While a professional evaluation from a qualified medical professional is the best test, there are ways to check for concussions “in the field.”

Testing before a Head Injury Happens

Concussion testing is often done for athletes (such as football players and boxers) well before any head injuries can occur. This is done to establish a baseline for the athlete’s brain function so there is something to compare post-injury test results to. These tests should be the same as whatever tests you plan to use for a post-injury concussion check.

Types of Concussion Tests after an Injury

There are numerous testing methods that can be used to assess the likelihood of a concussion after an injury. Ideally, these tests should be conducted by an expert to properly assess the presence and severity of a concussion. However, if you don’t have access to an expert and need to make an assessment, here are a few checks to conduct:

Ultimately, if you suspect a concussion or other traumatic brain injury, you should immediately seek professional medical assistance.