The frontal lobe is the home of much of what makes us human. It plays a role in everything from movement to intelligence, helps us anticipate the consequences of our actions, and aids in the planning of future actions.

The frontal lobe is the home of much of what makes us human. It plays a role in everything from movement to intelligence, helps us anticipate the consequences of our actions, and aids in the planning of future actions. This part of the brain is the newest from an evolutionary perspective, and is the last to develop, making the frontal lobe both highly malleable and susceptible to developmental damage. 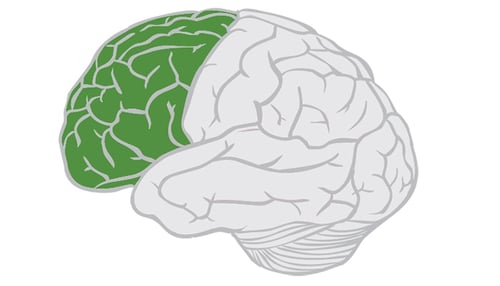 Where is the Frontal Lobe Located?

Neuroscientists have traditionally divided the brain's cerebrum into four lobes: the frontal, parietal, occipital, and temporal. The cerebrum is the newest part of the brain to have evolved, and houses most “higher” functions, such as conscious thought, morality, memory, and the ability to learn through memorization, deduction, and other complex processes. The frontal lobe plays a key role in this complex set of cognitive functions.

What Does the Frontal Lobe Do? 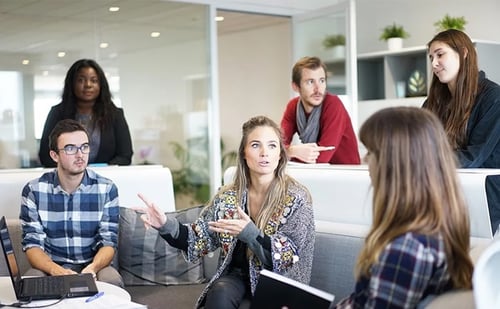 The frontal lobe is the slowest part of the brain to mature, continuing to create and prune neural connections until a person's mid-twenties. This means that brain damage early in life renders the frontal lobe particularly vulnerable, potentially affecting behavior and cognition forever.

Some of the many functions of the frontal lobe include:

What Are Some Important Structures in the Frontal Lobe? 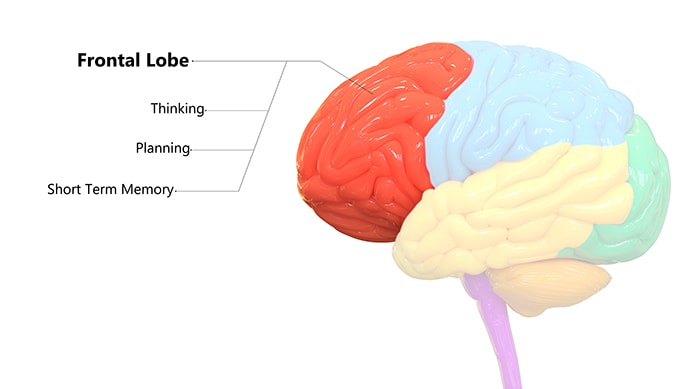 Most neuroscientists divide the frontal lobe into four distinct regions, each containing a number of vital structures. Those include:

How Does the Frontal Lobe Interact With Other Areas of the Body?

Though the frontal lobe is often deemed the seat of consciousness, it cannot think or feel alone. No single brain region can fully control any other region or function without heavy input from the body, other parts of the brain, and the outside world. The frontal lobe is no exception, and works alongside all other brain lobes to coordinate consciousness.

Because the frontal lobe is home to many higher functions, it is especially dependent upon experiences and memories. That means that social interactions, education, and similar experiences heavily affect the functioning of this important brain region. Sensory input also plays a key role, since the frontal lobe relies on memory, previous experience, and information about the surrounding world to judge the potential effects of future actions. 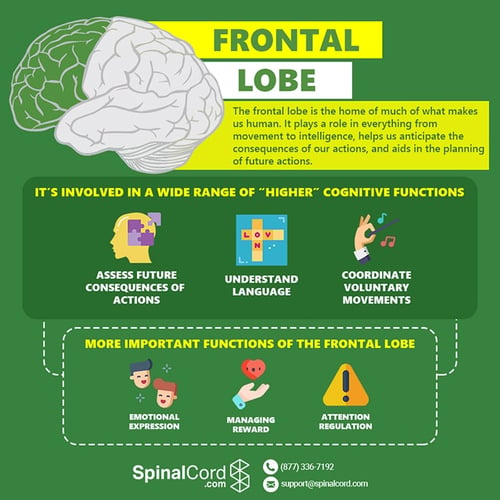 What Happens when The Frontal Lobe is Damaged?

Most people experience some atrophy in the frontal lobe in their senior years, with frontal lobe volume decreasing by .5%-1% each year beginning around age 60. This slow and steady decline accounts for many of the changes, such as mild memory loss and difficulty with finding some words, associated with normal aging. More rapid frontal lobe decline can lead to symptoms of dementia.

The frontal lobe is highly vulnerable to damage for at least two reasons: first, as the last brain region to fully develop, developmental anomalies—including child abuse, an insufficiently stimulating environment, drug use, infections, and other factors—can permanently alter its development. Second, the frontal lobe's home in the front of the forehead renders it highly vulnerable, especially to auto accident-related injuries, violence, and falls. Even relatively minor blows can rattle the brain sufficiently to impede frontal lobe functioning.

The effect of frontal lobe damage is dependent on its location and severity, as well as how quickly it is detected. Children who face serious abuse may live with frontal lobe damage for years, while car accident survivors often get more immediate help. Treatment for frontal lobe injuries typically includes medical and psychological treatment, since the frontal lobe houses the emotional life and personality.

Overall health, age at the time of injury, quality of medical treatment, and an active and stimulating environment can all affect recovery trajectories. Seniors are more vulnerable to frontal lobe damage because their frontal lobes are already deteriorating. Likewise, people living in unstimulating environments, or who do not regularly “exercise” their brains may experience more rapid deterioration and only minimal improvement.