Traumatic Brain Injuries occur from penetrative harm to an individual's head which ultimately leads to damage to the brain.

A traumatic brain injury (TBI) is damage to the brain which has been caused by an external force or factor, such as an accident, and includes the subsequent internal complications they can cause, such as tissue damage and swelling and lack of oxygen to the brain.

Injuries of this kind, much like any other brain injury, are all unique to the environmental, biological, and situational factors surrounding them. The location of damage to the brain, the severity, and the time lapse before gaining treatment can all greatly alter the symptoms that are experienced by the patient.

Because of the range of potential outputs that these situational factors can create, TBIs are most often characterized as a “chain of events.” Let’s focus some more on the 'first instance' or the causal injury for clarification of the different types of traumatic brain injury.

There are three categories into which traumatic brain injuries are commonly divided.

Closed head injuries are the most common scenario. This means there will be no visible bleeding or open wounds. In these situations, the head moves rapidly in more than one direction and the brain has no choice to follow. If the brain twists or collides against the skull, it could result in internal bleeding in the brain or the damage to nerve fibers.

Penetrating or open wound brain injuries may be paired with a closed head injury but are seen less frequently in hospital emergency rooms. If an individual suffers from this type of injury, they will risk exposure of the brain through a breakage in the skull. Examples of these forms of injuries include head traumas from sharp objects such as knives, gunshot wounds, or in some cases, extreme sporting accidents. These can be more traumatic to witness due to the more graphic nature but in reality may have a more positive outlook if the damage is restricted to one area.

The final kind of injury from head trauma is a crushing injury, in which the brain is compressed between two objects, and although it may sometimes damage the brain, it is more likely to result in damage to the brain stem and the base of skull and/or neck region.

The seriousness of a brain injury is determined from the treatment process and can range from mild to severe. An individual may remain conscious yet have a serious injury, whereas somebody with mild and relatively minor damage may lose consciousness.

Symptoms for minor injuries may include blurred vision, lethargy, confusion, or alterations to some of their senses. A more severe injury may cause vomiting, pupil dilation, seizures or numbness of their limbs and extremities.

When treating an individual with a traumatic brain injury, the course of action will depend upon many variables, including the way the injury occurred, how severe the damage is and which part of the brain has been affected. Immediate medical attention is crucial for moderate and severe injuries, as any damage caused internally due to the external accident cannot be reversed. Concentrating on getting oxygen to the brain is crucial to avoid anoxic or hypoxic injuries, as further discussed in the section on Acquired Brain Injuries.

Download The Simplified Guide to a Traumatic Brain Injury 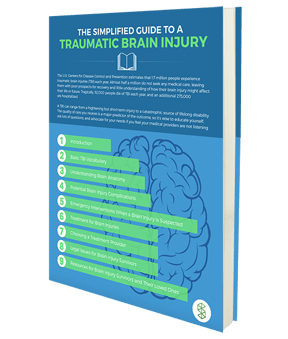