Paralysis is the inability to move a part of the body and comes in different types. One may become paralyzed after a spinal cord injury (SCI) or trauma. There are four types of paralysis — Monoplegia, Hemiplegia, Paraplegia and Quadriplegia.

In childhood, you probably learned that paralysis means the complete inability to move, to sense touch, or to control bodily sensations. As with most things we learn as children, the real meaning of paralysis is actually significantly more nuanced. Paralysis comes in many forms, and the extent to which a person is immobilized may change over time as physical therapy, changes in health, and sheer luck alter the way the body responds to physical damage. 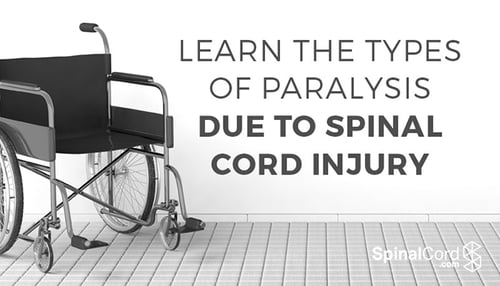 Paralysis is the inability—whether temporary or permanent—to move a part of the body. In almost all cases, paralysis is due to nerve damage, not to an injury to the affected region. For instance, an injury in the middle or lower regions of the spinal cord is likely to disrupt function below the injury, including the ability to move the feet or feel sensations, even though the actual structures are as healthy as ever.

So what happens to the body when it is paralyzed? That depends on the cause of the paralysis, but generally at least one of the following factors is in play:

The spinal cord is like the brain’s relay system, so when something in the spinal cord doesn’t work or is injured, paralysis is often the result. These injuries can be the product of traumatic accidents, or diseases such as strokes and polio. Most spinal cord injuries are incomplete, which means that some signals still travel up and down the cord. With an incomplete injury, you may retain some sensation and movement all the time, or the severity of the paralysis may change—sometimes on a highly unpredictable basis. A complete spinal cord injury, by contrast, completely compressed or severs the nerves in the spinal cord, making it impossible for the signal to travel.

Rarely, injuries to the affected area cause paralysis. This is more common among people who have another medical condition, such as diabetes. For instance, diabetic nerve damage can cause nerves in some area of the body, particularly the feet, to cease functioning. You’ll still be able to move, but you might have reduced or little sensation. This can result in more laborious movements, a loss or decrease in your ability to walk, and an increased risk in some other health issues, such as cardiovascular episodes.

How Does Someone Become Paralyzed? 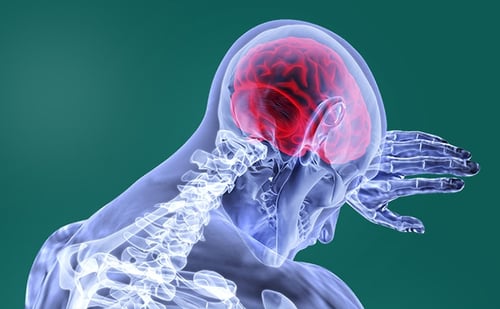 There are many different causes of paralysis—and each one may result in a different kind of paralysis, such as quadriplegia (paralysis of arms and legs), paraplegia (being paralyzed from the waist down), monoplegia (paralysis in one limb), or hemiplegia (being paralyzed on one side of the body). According to the Christopher Reeve Foundation, approximately “1.2 million Americans are living with paralysis resulting from spinal cord injuries.” Car accidents, falls, sporting injuries, and acts of interpersonal violence are the cause of most spinal cord injuries.

Other potential causes of paralysis include (but are not limited to):

Each of these conditions can cause paralysis—though the chance and severity of the paralysis may vary greatly from one case to the next. 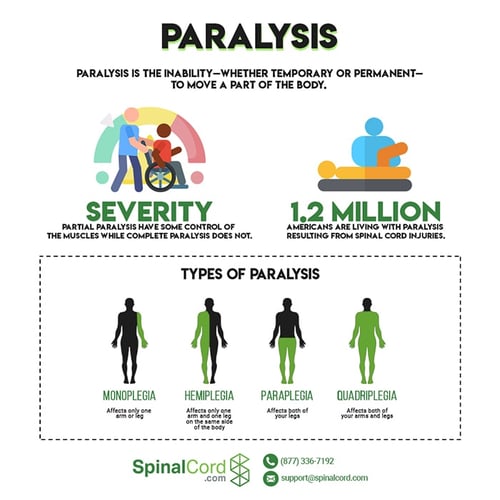 In reality, there are many types of paralysis because there are innumerable ways that the body can be injured. There are four main categories of paralysis, however, which have to do with the portion of the body that is affected.

Monoplegia is paralysis of a single area of the body, most typically one limb. People with monoplegia typically retain control over the rest of their body, but cannot move or feel sensations in the affected limb.

Though cerebral palsy is the leading cause of monoplegia, a number of other injuries and ailments can lead to this form of partial paralysis, including:

Monoplegia is sometimes a temporary condition, and is especially common in the aftermath of a stroke or brain injury. When the nerves affecting the paralyzed area are not fully severed, it is often possible to regain significant function through physical therapy.

Hemiplegia affects an arm and a leg on the same side of the body. With hemiplegia, the degree of paralysis varies from person to person, and may change over time. Hemiplegia often begins with a sensation of pins and needles, progresses to muscle weakness, and escalates to complete paralysis. However, many people with hemiplegia find that their degree of functioning varies from day to day, and depending on their overall health, activity level, and other factors.

Hemiplegia should not be confused with hemiparesis, which refers to weakness on one side of the body. Nevertheless, hemiparesis is often a precursor to hemiplegia, particularly for people with neurological issues.

Hemiplegia is sometimes temporary, and the overall prognosis depends on treatment, including early interventions such as physical and occupational therapy.

As with monoplegia, the most common cause is cerebral palsy. However, other conditions, such as incomplete spinal cord injuries, brain injuries, and nervous system disorders can also result in hemiplegia.

Paraplegia refers to paralysis below the waist, and usually affects both legs, the hips, and other functions, such as sexuality and elimination. Though stereotypes of being paralyzed below the waist hold that paraplegics cannot walk, move their legs, or feel anything below the waist, the reality of paraplegia varies from person to person—and sometimes, from day to day.

Thus paraplegia refers to substantial impairment in functioning and movement, not necessarily a permanent and total paralysis. Rarely, people with paraplegia spontaneously recover. This may be due to brain or spinal cord functions that are not yet understood, such as regeneration of neurons. More typically, paraplegics are able to regain some functioning with physical therapy, which works to retrain the brain and spinal cord to work around limitations while strengthening muscles and nerve connections.

Spinal cord injuries are the most common cause of paraplegia. These injuries impede the brain's ability to send and receive signals below the site of the injury. Some other causes include:

Quadriplegia, which is often referred to as tetraplegia, is paralysis below the neck. All four limbs, as well as the torso, are typically affected. As with paraplegia, though, the degree of disability and loss of function may vary from person to person, and even from moment to moment. Likewise, some quadriplegics spontaneously regain some or all functioning, while others slowly retrain their brains and bodies through dedicated physical therapy and exercise.

Occasionally, quadriplegia is a temporary condition due to brain injuries, stroke, or temporary compression of spinal cord nerves. Some spinal cord injury survivors temporarily suffer from quadriplegia immediately after the injury, then experience a less systematic form of paralysis as swelling goes down, the nerves become less compressed, or surgery reverses some damage.

If you want to learn more about paralysis causes, types of paralysis, and how to cope with paralyzing conditions, please reach out to the spinalcord.com team today! We’re here to help.