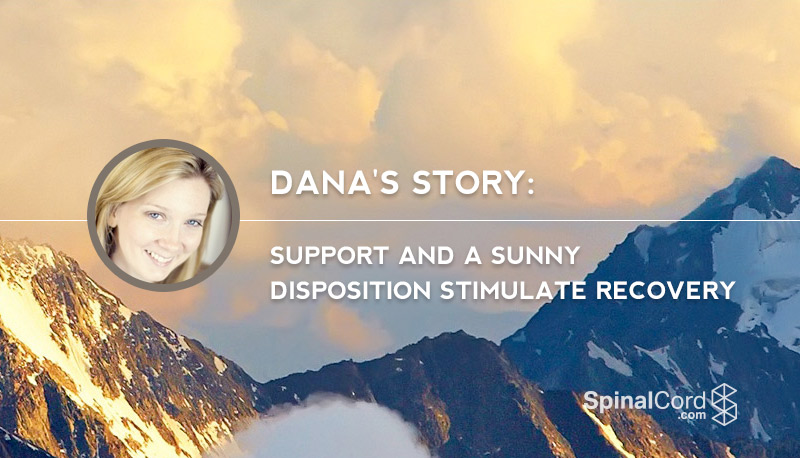 June 17, 2000, started out like any other normal Saturday for Dana Guest. It was the beginning of summer break, between her junior and senior years of high school, and Dana was meeting her mom to get pictures taken for their theme park season passes.

Dana was waiting at a red light behind five other cars when she took a quick glance into her rearview mirror. She had no way of knowing that what she saw was about to change the rest of her life.

A full-size mack truck was barreling toward her resting car at 55 miles per hour. She had nowhere to go and she knew that the truck was going to hit her.

The force of the impact pushed her car two whole football fields forward. The front wheel of the truck was in her backseat. And, even with a seatbelt and airbags, Dana’s body was forced across her car, with her head ending up near the floorboard of the passenger seat.

The accident rendered her unconscious, but she awoke on-site to a paramedic checking her vitals. Dana remembers an immense sense of calm at this moment, but it was later explained to her that this feeling was probably a result of shock from the trauma. She was aware that she couldn’t feel the paramedic checking her feet and legs, but the gravity of what that meant did not yet occur to her.

Dana was cut out of her car with the Jaws of Life and flown by helicopter to a local hospital for surgery. After hours of operation, the doctors shared with Dana and her family that she had sustained a complete injury to the sixth cervical section of her spine (C6), which meant she was now quadriplegic.

Dana would never walk again. And, with modern technology, doctor’s said that the likelihood of her regaining function to her hands and arms was slim.

The driver of the truck walked away unharmed.

Despite her diagnosis, Dana and her family were determined to do what they could to impact her prognosis. She was flown to Shriner’s Hospital for Children in Philadelphia six weeks after the accident for rehabilitation.

Dana worked hard at her recovery. Immediately following her accident, she had no feeling in her arms whatsoever. But as her physical therapy progressed, she gradually regained feeling in her triceps and focused on getting the mobility of her fingers and hands. This was a feat that would ultimately take a year to reach the point she is at today, with full function of the muscles in her hands and arms.

A Network of Support

That did not stop Dana from going back to school that fall, however. She rolled into her school that September with the rest of her friends and graduated high school with honors. She didn’t skip a beat, either. Dana made it to every dance, sports event, and school function that she was interested in and was even nominated for Homecoming Queen.

She recalls her support system being pivotal to her recovery. Her family was with her every step of the way. And her friends picked up right where they left off while she was at school. Dana’s appreciation and empathy for what her family went through during this time is remarkable. She never hesitates to share her gratitude for what it meant that they were there to support her journey.

This support came in handy when it came time to take the truck driver to court. Dana attended many of the proceedings herself. She recalls how difficult it was to listen to the prosecutor give excuse after excuse in an attempt to show how the accident could have been Dana’s fault.

From suggesting things about her car, like missing brake lights, to attacking her personally, with allegations of a seventeen-year-old drinking and driving on a Saturday morning. At one point, they even accused her of faking the severity of her injury.

This process was gut-wrenching on both Dana and her parents. But it was worth it in the end when Dana was able to receive compensation for her injury which helped her to cover the exorbitant costs of spinal cord injury treatment.

Life After the Injury

In the months and years after the injury, one of the most important things that Dana learned is that life goes on. She was certainly angry at first, “at the man who hit her. And at God.” But somewhere through all of the trials and tribulations she realized that if she carried that anger around forever, the only one who would suffer in the end would be her.

The biggest turning point toward happiness for her was in finding that forgiveness within her own heart. “I have that power, not him,” she said, remembering that moment.

And two years after the injury she found a new source of happiness, in the surprising form of a baby girl. Dana did not know if she was ever going to be able to have children and she was ecstatic when she got the news. Her daughter pushed her recovery to reaches that she never thought possible.

Today, Dana is the team manager for her daughter’s club soccer team, which is a full-time job in and of itself. But she still finds time to give back to the spinal cord injury (SCI) community. She is on the board of the Core Foundation, which helps raise funds for individuals who are financially destitute, particularly focusing on giving out therapy scholarships. And she is helping to launch a new event to bring the SCI community together called Push Nation Fest.

Becoming active in the community helped Dana to learn much more about her injury and herself. In her words, “life can be really good, and you can get to the point where you are happy again.” Joining with others and sharing your story helps to keep that hope alive.

To read more stories like Dana’s, along with industry news and updates, be sure to subscribe to the journal and never miss a beat.

4 Most Encouraging Things about Epidural Stimulation and Spinal Cord Injury

The world of spinal cord injury (SCI) research was shocked in 2011 when Professor Susan Harkema from the University of ...

How to Sign Up for an Epidural Stimulation Trial

The possibility of one day curing spinal cord injuries is much brighter thanks to the discovery of epidural stimulation. ...