At SpinalCord.com, we understand that spinal cord injuries (SCIs) are traumatic for patients and their families. These life-altering injuries cause disruptive changes in every aspect of their lives, and there is a lot of new information to navigate and understand. Part of our goal at SpinalCord.com is to educate spinal cord injury survivors and their families, which includes sharing the stories of other survivors to provide new insights or perspectives that can change their outlook.

If you or a loved one has suffered a spinal cord injury, the main message to remember throughout your recovery and in your new life is that you are not alone. As such, we’ve created a new blog series that shares the stories and insights of other spinal cord injury survivors. The topics of the series include how their spinal cord injuries have changed their lives, the impacts that they had on their relationships with family and friends, and what they are doing in their lives post-injury.

Everyone facing the reality of a life-altering spinal cord injury knows that their life is going to be different. However, the ways that their injuries impact their bodies and change their lives differ from person to person. For some spinal cord injury survivors, it can result in seemingly overwhelming darkness of depression and anxiety. For others, it’s fuel to overcome their challenges and take back their lives.

Two members of the SpinalCord.com community, Carley Dole and Tiffiny Carlson, share their experiences in how their spinal cord injuries changed their lives, relationships with their families and friends, and their outlooks on life as a whole. 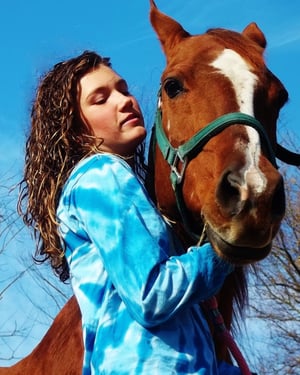 Spinal cord injury survivor Carley Dole is one of the incredible survivors who is living her life each day with a renewed sense of purpose. Dole, 21, is a spinal cord injury and traumatic brain injury (TBI) survivor from Shelbyville, Michigan. She sustained a debilitating spinal cord injury as a senior in high school when a horse she was preparing for a fair bit her unexpectedly. Grabbing the right side of her face with its mouth, the horse threw her into the air, causing a variety of injuries that included a severe TBI, brain contusions and bleeds, a dislocated jaw, and multiple cervical spinal cord injuries.

In addition to having to relearn how to walk, talk, and perform other essential functions, she first had to relearn who she was. The brain injury she sustained left her unable to recognize her name, parents, or their family home. Her long-term and short-term memory were gone, and she had to relearn everything and rebuild her relationships with family and friends.

Spinal cord injury survivor Tiffiny Carlson is an incomplete C5-C6 quadriplegic who lives her life as independently as possible and seeks ways to help and inspire others. Carlson also was injured as a teenager at age 14 during a diving accident in Minnesota that irreparably damaged her cervical spinal cord. The accident left her with neurological and functional damage reminiscent of a complete spinal cord injury. Carlson says she has an intermittent bicep function and wrist function, but no finger or tricep movement.

Carlson is someone who believes in doing everything possible to stay healthy and fit. She eats healthy and engages in adaptive yoga and other physical exercises to keep her body moving — activities that are frequently recommended for spinal cord injury survivors to help keep secondary complications to a minimum.

How Their Injuries Affected Their Daily Lives

Due to their injuries, both Dole and Carlson each faced enormous physical, mental, and emotional hurdles throughout their recovery. For Dole, having both a TBI and an SCI made her recovery exceedingly challenging. Initially, her spinal cord injury recovery and treatment were put on hold until she started to make progress in her TBI therapy and treatments:

Dole also says she describes the first year of her life as being akin to the movie “50 First Dates.” She would use video cameras — going through three cameras in the first nine months — to document everything she did each day so when she’d wake up, she knew what she did the previous day and what her life looks like at that moment.

“Video was a huge turning point and being able to document everything,” she says. “I went through three cameras in the first nine months just documenting everything so when I woke up in the morning, I’d know what I did yesterday. What my life looked like. That’s a huge piece that I think helped my recovery."

For Carlson, at the time of her spinal cord injury, she says that there wasn’t much by way of treatment available for someone her age aside from physical therapy. Carlson spent three months engaging in physical rehabilitation at the hospital before having to return to high school to complete her studies. After graduation, she was able to participate in rehabilitation for learning independently for about eight months, which focused on helping her gain the practical skills and knowledge to live on her own with a spinal cord injury.

Carlson says that something that made it initially difficult for her in the first few years after her injury was that there weren’t really any female public SCI role models, and social media was not yet a thing. As an aspiring writer, she turned to the internet and was one of the first people to begin blogging about disabilities.

“Without the internet kind of rising up right when I hurt myself, I don’t really know how I would have made it through. Having the internet helped me so much; it provided me with a job, a community, and friends.”

The Impact of Their Injuries on Their Relationships

Carlson says that with her SCI, while her family and friends were supportive after her accident, it was difficult for them to understand or relate to what she was thinking and feeling. Although they were there to talk to and tried the best they could, and as much as she loved them, it wasn’t enough because they couldn’t relate on the same level. In much the same way, Carlson says also had a tough time in high school and felt that she didn’t fit in with her classmates because no one truly understood her injuries and experiences.

“For me, it was having a peer mentor; having a relatable person that knew the pain and the struggle was really what, I think, was key for me. I’ve heard of other people who don’t necessarily need that; they have a really great mom or dad that were really huge. But for me, it was meeting these women as peers that really made an impact.”

As such, one of the most poignant factors that played a role in changing her life and mindset was meeting other female spinal cord injury survivors — one of whom, an older woman named Karen, demonstrated that it was possible to live your life fully and independently despite paralysis. During her time in independent living rehabilitation therapy, Carlson met and became friends with another woman, Stephanie, who was the same age and didn’t care about what anyone thought of her and lived her life in an outgoing and confident way.

“She was very tough; a very, very strong-willed lady,” says Carlson. “She showed me how to ride the city bus and not be afraid of strangers, and how to put myself in situations where I was probably too afraid to before... I was always timid, and I feel like she was in my life for a reason. And she showed me how to be strong, which is huge.”

Another impactful time was when Carlson was studying Mass Communications at Augsburg College (now Augsburg University), which has a large disability community. While there, she met women other who helped shape her perspective about how to live her life as a competent and confident spinal cord injury survivor.

For Dole, she turned to her family and friends in the time after her spinal cord injury to find comfort and guidance from them. Dole says that her family was always very close-knit and played a significant role in her spinal cord injury recovery; that everyone was incredibly supportive of her throughout the process, and that her injury helped to strengthen their bonds and relationships. However, it wasn’t that way with many of her high school friendships.

“I think it’s challenging for anyone to go through an accident like that, but for me as a teen, specifically, my family was very supportive, but many of my friends in high school were not. I think they couldn’t relate. It’s not a normal experience to go through at 15, and you’re worried about prom dresses, how your hair looks, and your outfit for the day. You’re not worried about relearning who you are, or relearning how to walk and write.”

“It was a very discouraging process to go through with my friends, but my family was always very supportive and backed me,” Dole says. “So, I think if I didn’t have that, I think it would have been a very different recovery.”

In the next part of this blog post series, which will be released tomorrow, we will provide further insights from Dole and Carlson on what their life is like today and how their injuries and experiences have inspired them to help others.

If you have suffered a spinal cord injury and would be interested in sharing your story for a potential future blog post, please be sure to share the information about your injury and experiences by clicking on the button below.