SCI Research Spending: Why is Paralysis Being Shortchanged? 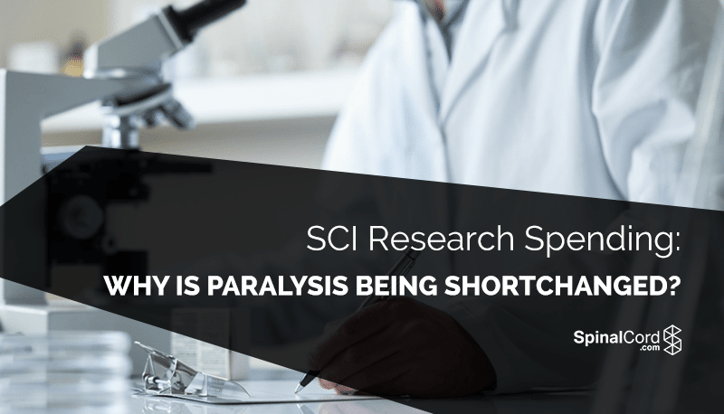 I believe there is an inherent bias against spinal cord injury research. It seems like most of the general public (and some scientists), in their heart of hearts, don’t think it’s possible. Or, they love the idea of it, but deep down they don’t think a cure will happen. Paralysis is permanent, don’t ya know? They’d love to see a cure/treatment come to pass, but they just think it’s out of the running.

My theory certainly seems true when you look at the raw numbers. On the surface level, the amount of money spent on spinal cord injury research pales to the money spent on other ailments. A great example of this imbalance can be found when you look at the money spent on AIDS research. According to the National Institutes of Health’s (NIH) Research, Condition, and Disease Categorization (RCDC) data, about $3.78 billion was spent on various types of HIV/AIDS research in the U.S. in 2016 when only $71 million was spent on SCI-related research in the same year. When you see this level of discrepancy, it’s difficult not to ask the tough question: Are we not as important?

A Lack of SCI Research

There may be an answer to this question. Dr. Wise Young, one of the world’s most lauded SCI researchers, doesn’t see it as the SCI population being shortchanged/overlooked. Instead, he sees it in a more practical light — a lack of SCI research labs combined with a shortage of scientists in the field (and new scientists entering the field). But he has a solution to this problem: He first says we should make SCI research funding more available so that more and better scientists can see the field is worth their investment of time, research and effort. Additionally, the number of competitive laboratories dedicated to SCI research also should increase in order to compete for more NIH funding.

One would think the lifetime cost of caring for someone with a SCI would have infused the SCI research world with a fervor, but it hasn’t. The care/cost numbers really are quite jaw-dropping. Depending on one’s level of injury and the age they were injured at, the lifetime cost of living with an SCI is approximately $6 million. From daily expenses like equipment, doctor’s appointments, and pharmaceuticals to bigger items like a vehicle and an accessible home, it’s profoundly expensive to live with an SCI.

Compare this to the lifetime costs of HIV treatments/living with AIDS, and it doesn’t add up. The approximate lifetime cost of treatment for someone with AIDS is $394,000. While this is still a hefty price tag, it’s not close to the lifetime costs of living with a SCI. And even though there are a lot more people living with HIV/AIDS in the U.S. than SCI — more than 1.1 million vs. 285,000, respectively — the number of new cases each year are not as far apart, with an estimated 37,600 new HIV/AIDS cases each year and 17,500 new cases of SCI in that same amount of time.

However, one thing to mention about the NIH research funding numbers — nearly $3 billion versus $71 million in research in 2016 — is that the HIV/AIDS research includes “both intramural and extramural research (including research management and support, Management Fund, and Service & Supply Fund), buildings and facilities, research training, and program evaluation, as well as research on the many HIV-associated co-infections and co-morbidities, including TB, hepatitis C, and HIV-associated cancers.” So it’s not just the research itself that is being funded — those numbers also include many other costs as well.

In the aforementioned article by Dr. Young, his recommendations for increasing SCI research are still relevant today. However, it saddens me to see that not enough of what he recommended has come to pass since the article was published. But what he says makes sense: throwing cash at the problem may help, but what we really need for SCI research to reach the same level as HIV/AIDS and other research is an increased number of labs and people in the field. This is a huge part of why AIDS research gets more funding — there are more grant requests from more people at more facilities.

How SCIs occur is another reason why SCI research funding needs to increase. To prevent AIDS cases from rising, much can be done in the way of prevention, like education, condom-use, etc. SCIs, however, are many times about being in the wrong place at the wrong time. Injury prevention can help (ThinkFirst), but SCIs often occur from traumatic accidents that cannot be avoided.

The Future of SCI

Don’t forget we also need to instill hope. We’re fighting against many who think a cure will never happen, which Dr. Young failed to mention. Maybe since paralysis has been a fatalistic condition since the dawn of time (both the Bible and Egyptian scriptures reference paralysis), unlike AIDS, the impossibility against finding a cure is ingrained into the psyche of millions. We need to change this.

Epidural stimulation and the results it’s producing is finally changing the minds of many who don’t believe in a cure. We have Dr. Susan Harkema and Dr. Reggie Edgerton among those researchers to thank, as they are among the incredible minds behind this amazing SCI treatment. If you aren’t familiar yet, epidural stimulation is a recent discovery that found that electrically stimulating the spinal cord can awake certain neural patterns. When combined with harness gait training, an even higher level of return is possible — like increased leg muscle movement, being able to stand by oneself, or even regaining some bladder, bowel and sexual abilities.

There are two facts in my opinion on this subject that cannot be avoided. Fact No. 1: The future of SCI research is extremely bright. Fact No. 2: The research money should be pouring in, but it still isn’t. I ask, readers of my article, when does a loud plea for help become necessary?