What You Should Know about Permanent vs Temporary Paralysis

There are several levels and types of paralysis that can result from a spinal injury. In some cases, paralysis can be temporary—in others, it may be permanent. Here are a few things that you should know about paralysis. 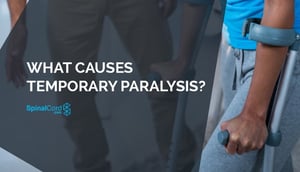 The paralysis definition that we think is most effective is: “the partial or full loss of movement, usually in response to an injury or illness.” This aligns with the paralysis definition outlined by the Merriam-Webster Dictionary, which defines it as “the complete or partial loss of function especially when involving the motion or sensation in a part of the body… loss of the ability to move… a state of powerlessness or incapacity to act.”

According to research from the Christopher & Dana Reeve Foundation, “nearly 1 in 50 people [live] with paralysis” in the United States. Paralyzation can result from a variety of factors, such as intentional or accidental poisoning, illness, or injury.

Strokes are the most common causes of paralysis (33.7%) because of the effects strokes have on the brain and its ability to communicate with the spinal cord. This is followed by spinal cord injuries, which account for 27.3% of paralysis cases and multiple sclerosis (MS), which accounts for 18.6%, according to the Foundation.

What Does Permanent Paralysis Mean?

Permanent paralysis is often caused by severe brain damage or the severing of the spinal cord.

What Does Temporary Paralysis Mean?

Temporary paralysis (also known as periodic paralysis) occurs when all or some muscle control in any part of the body comes and goes periodically. This episodic paralysis most often occurs because of muscle weakness, disease, or hereditary causes.

There are also cases when people have experienced something traumatizing enough that they are unable to move. However, there is a more serious condition that is referred to as temporary paralysis, more commonly referred to as periodic paralysis, that refers to a disease which causes temporary episodes of muscle weakness.

Most of the time the disease is inherited—and it can happen that the symptoms were mild with past relatives so the family was not aware of the presence of the gene. As noted by Periodic Paralysis International:

“Only one parent need carry the mutated gene, and that parent may not show symptoms. About half of the females and a few men who carry the gene mutation have no symptoms, or have such mild symptoms that they are never diagnosed as periodic paralysis. These people can still pass the gene on to their children.”

In any case, when a person begins to show signs of paralysis, they should always seek medical attention immediately before trying to come to any conclusion about its cause.

The different types of temporary paralysis are defined by which ion channel in the muscle membrane is affected. There have been around 30 mutations that have been discovered. A few examples include:

According to data from Cedars Sinai, this group of diseases may be diagnosed by blood testing or genetic testing for known periodic paralysis defects. Treatments usually consist of:

Types of Paralysis and Their Symptoms

Although paralysis is often used as a blanket term to describe any loss of sensation or function, the truth is that the condition can take many forms. Depending on the severity of the damage and what muscle groups are affected, the body may react differently.

When paralysis is limited to just one part of the body – such as a single limb – it is known as monoplegia. Patients with this form of paralysis usually retain motion and sensation elsewhere in the body. Sometimes, monoplegia is a temporary condition of a stroke or brain injury. Most often, monoplegia is caused by cerebral palsy, though other trauma, such as strokes, tumors and nerve damage, may be responsible.

Not to be confused with diplegia, this type of paralysis occurs when a patient experiences a loss of function in an arm and a leg on a single side of the body – also known as the paralysis of one side of the body. While cerebral palsy remains the most common cause, the extent of paralysis in hemiplegia patients can change over time, either from day to day or declining over a long period. Oftentimes, it is preceded by a weakness on the same side of the body, known as hemiparesis. Hemiplegia can result in a variety of conditions, including:

When a patient is paralyzed from the waist down he or she is suffering from paraplegia. Like hemiplegia, this condition – most often the result of a spinal cord injury – can vary from person to person and its effects depend on a variety of factors. Some of the symptoms of paraplegia include:

Sometimes, patients are not even restricted to a wheelchair, and in rare cases, they are able to spontaneously recover.

The most severe of these four basic forms of paralysis, patients suffering from quadriplegia (or tetraplegia) have paralysis from the neck down. The severity of this condition varies from one case to the next, and patients can sometimes recover with physical therapy and other rehabilitation methods. Spinal cord injuries are usually the culprit here as well, and quadriplegia can on occasion be a temporary effect of a stroke, brain injury or temporary spinal pressure.

This type of symmetrical paralysis affects the same area on both sides of the body — such as both arms or both legs. It most frequently affects children but can impact anyone of any age.

Infections That Can Lead to Paralysis

An infection results from bacteria, viruses, fungi and parasites getting into the body. In some cases the body's immune system can fight it on its own, and in others the aid of prescription medications is necessary. However, in the most extreme cases the infections can cause various other ailments — including causing paralyzation.

Paralysis from infections, although uncommon, is a very real threat. To educate yourself further, here are some things you should know about infections that can lead to paralysis:

Most bites from insects such as fleas, mosquitoes, bed bugs, and spiders, pose hardly any danger to human health. The venom or salivary fluid from these infectious insects usually just causes itchiness and swelling at the bite point on your skin for some time after it occurs.

Sometimes, however, the bites of these insects cause paralysis, malaria, encephalitis, and West Nile Virus, among other serious health problems. These bites can also cause life threatening and traumatic conditions if you are allergic to the insect itself or the organisms they introduce to your body upon biting your skin.

Mosquitoes have become infamous as disease carriers due to outbreaks of Zika Virus and other illnesses. The fact is that the Zika Virus has been linked to a variety of ailments including brain infections. The attack on the brain stem resulting from Zika can lead to paralysis. West Nile Virus is another infection attributed to mosquitoes that can also cause paralysis and death.

A spider bite can be life threatening, especially in the elderly and in infants, because their immune systems are not as strong. For example, the black widow spider, found throughout the United States, is one of the most dangerous spiders in the world. Besides potentially causing paralysis,  the black widow's bite can cause stiffness and intense pain at the site of the bite along with abdominal pain, muscle spasms, fever, chills, and breathing or problems with swallowing.

In most cases, the bite of a tick isn't harmful, but in others it can lead to life-threatening problems like Lyme disease, tularaemia, ehrlichiosis, and paralysis of the legs.

Odds are you have felt the intense sting of an ant bite at one point or another in your life. For the most part, these bites are harmless. However, in rare cases, the small fluid-filled bites of a fire ant bite can cause illness, allergic reactions, anaphylactic shock, vomiting, and, you guessed it – paralysis.

The sting of a scorpion causes sharp burning pain and numbness, but can also lead to infections, paralysis, and even death.

Food infection, more commonly known as food poisoning, is a common, but usually mild, illness. Unfortunately, some cases of food infection lead to severe and deadly health problems. Contamination of food and water is the main cause of food infection.

The most common cause of acute paralysis in the United States is chicken contamination, according to NutritionFacts.org.

Muscarine poisoning is caused by the ingestion of dozens of species of mushrooms and toadstools. In severe cases, these poisons can induce the start of complete or partial paralysis by attacking one’s central nervous system.

Certain species of fish are poisonous by nature, like puffer fish. Some species of edible fish found in the Pacific and Caribbean Oceans also have ciguatera poison – similar to that of a puffer fish – produced by dinoflagellate, which is a tiny sea parasite. This poison can cause paralysis since it attacks the nervous system of the person who eats it.

Food poisoning can be caused by ingesting mussels, clams, scallops, and oysters because they can contain Saxitoxin – which is a potent neurotoxin. Ingestion of saxitoxin can result in a variety of severe illnesses. It can even produce paralysis or weakness around the mouth within a few minutes of ingesting it, which can spread to the rest of the body gradually.

Pesticides on Food Can Lead to Infection as Well

The poisons in pesticides on produce can cause harm as well. It is therefore critical to wash produce thoroughly prior to consumption.

Some cases of food infections that have led to paralyzation can be attributed to the consumption of wild leaves, nuts, berries, flowers, botulism, under ripe tubers, arsenic or lead from fertilizers, cadmium from containers, lead from potteries, acids, and more.

How Can You Protect Yourself?

It would seem the best way to protect yourself from insect borne infections would be to wear bug spray. For more information on insect bites, check out the Center for Disease Controls guide to avoiding bug bites, and their guide to avoiding mosquito bites.

In terms of paralysis from infections related to food, your best defense is to follow safe handling instructions such as washing your food, avoiding cross contamination, and cooking your food to the recommended temperature. Learn more about food safety here.

Life Beyond the Injury

Even when paralysis strikes, there’s still a chance for relief. New scientific breakthroughs are emerging all the time, leaving you with the opportunity to vastly improve your quality of life. Moreover, if medical malpractice is to blame for the injury you or someone you love has suffered, you more than likely have a credible case for legal action.

You may initially balk at the idea of resorting to such lengths. After all, medical costs tied to spinal cord and brain injuries remain high. Don’t miss out on the chance to alleviate the financial strain that so often follows a life-altering injury.

Additionally, therapists and support groups are extremely helpful for providing much-needed assistance when it comes to coping with paralysis. Talk to your doctor and use some of the resources provided on websites that specialize in paralysis.

SpinalCord.com has been created as a resource for patients of spinal cord injuries and their families. Find everything you need to learn more about your injury, locate a doctor or treatment center, or discover financial relief to support you through this difficult time.
Learn More About the Author